In amongst Charlie Sheen's latest antics and the latest football scores, you may have noticed that the world was meant to (begin to) end yesterday, 21 May 2011.  That's why I held off posting till now.

The good news is that the 21 May was only judgement day...the end of the world is actually slated for 21 October 2011.  Five months to count down people.

The man behind this prediction is a preacher called Harold Camping who stated that on 21 May those worthy would be taken to Heaven by Jesus whilst the rest would be left to endure the end of the world over the next 5 months.  The prediction was based on some...interesting...mathematical gymnastics (see below for the calculation).

Now, rather than dwell of the religious aspects of this prediction, I thought I would instead dig into both the behavioural and goal setting aspects of this event.  What techniques did radio station owner Camping use to grow his subscriber base stimulate worship?

Behavioural principles
Loss aversion: We have an aversion to loss and will be motivated to take steps to avoid it.  In the drive for members, Harold Camping was putting the mother of all losses up for consideration - the loss of your life. 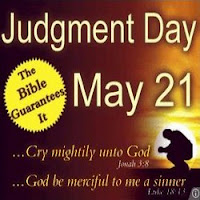 And to ensure he helped people over the line, Camping applied an old favourite marketing technique across a reputed 2000 billboards; "Judgment Day 21 May, 2011. The Bible Guarantee's it".

Anchoring: Camping used a specific date to fix people on his prediction.  The specificity of the date (and the 'complicated' calculation) gave it a marketing and media focus that it otherwise would not have gained.

Herding: Camping created two distinctive groups through this activity; the worthy and unworthy.  Appealing to the sense of pack behaviour, Camping was forcing us to decide between being a part of the Rapture or not (or indeed, between being part of his cult or not).

Status quo bias: Inertia is our default state. In order to tip people out of the status quo, Camping had to come up with something powerful and dramatic.  What better than the end of the world through earthquake and natural horror to convince us to pray?

Goal setting
The Camping prediction can also be used to illustrate one of the classic business tools - S.M.A.R.T. goals.  The theory is that you will maximise your chances of accomplishing your goal if it is specific, measurable, actionable, realistic and timebound.

Specific: a date (21 May 2011), a name for the activity (Judgment Day), and details of what would happen to those who did not repent helped the prediction gain traction.

Measurable: Camping provided the calculation for the both Judgement Day and the End of the World.

Actionable: Having a deadline is great, but you need to know what you need to accomplish - in this case` it was to pray and listen to Camping.

Realistic: well, this can be debated. However, by quoting scripture, providing crazy date calculations and pointing to real-world events as evidence of the prediction's veracity, Camping convinced many of the realistic nature of his prediction.

Timebound: specifying the dates of judgment and end of the world certainly qualify as timebound.

The ethics of what Camping did aside, you would have to agree that if his goal was to grow his member base through stimulating consideration of his preachings, then it probably worked (albeit temporarily).  Camping's combination of behavioural principles and goal setting created world wide interest in his church and his radio stations.  And whilst this is certainly no lesson in establishing credibility or an ethical or sustainable business model, just imagine the possibilities for your business if one crazy pastor can generate behavioural change in so many. Suddenly that product launch doesn't seem so hard.

The Camping 'calculation'
From wikipedia: Camping taught that the world would end May 21, 2011[17] using the following reasoning: