Converting browsers to buyers: Lessons from a food charity 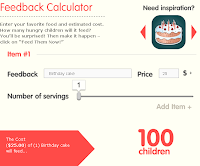 What's the cost of your favourite meal?  $10? $25? That is the question posed by WeFeedBack as part of a clever online App that turns charitable intention into donating behaviour and which serves as a great case study for businesses wanting to turn browsers into buyers.

Meet the WeFeedBack Calculator App
The WeFeedBack App is part of the World Food Programme's global effort to encourage donations to feed hungry and malnourished children, but instead of simply asking you to donate an amount you pluck out of thin air, they take you through a simple but evocative calculation.  Note the cost of your favourite food (say $10 for a focaccia) x the number of serves (eg 3 a week) = $30. The calculator then tells you how many children could be fed by a donation of the same value (in this example, 100).  Suddenly a donation of $30 seems embarrassingly affordable, easing my focaccia addled-conscience by offering great value for my contribution.
So let's look at the behavioural principles at play here.
Lessons for business
Just as the World Food Programme is working to convert intention (give to charity) to behaviour (actually donating), businesses endeavour to convert browsers to buyers.  So what would a business version of this App look like, using similar behavioural principles?
Imagine you are a gym and trying to sell annual memberships. What if you asked people to calculate;
How about car insurance?
You get the idea. Draw a personally relevant example (my favourite food, my doctor's visits, my time in the car) and extrapolate its value to contextualise what you are asking them to spend. Get them to engage in the (must be simple) calculation to heighten their sense of ownership in the process, and make magnify their benefits to close the deal. Happy conversion.
Posted by Bri Williams at 6:23 AM