"This is about me, not you!" So proclaimed Tim Minchin, a London-based Australian "rock star" comedian to his audience at the Palais in St Kilda on 25 Feb 2011 (Tim Minchin vs MSO).   Here are some business-life lessons that I have drawn from his stage craft. 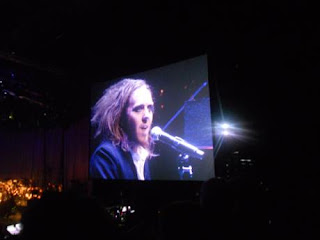 1. Be distinctive
Tim has spoken openly about how and why he conjured up his stage persona as the "comic rockstar".  Central to his carving out a unique position and winning an audience was the addition of a Baby Grand Piano, cleverly signaling to potential bookers and audiences that "gee, this guy must be good" because (a) he can afford a Baby Grand and (b) he can be bothered having it transported and set up every time. As Tim has said, it would have been easy for him to play the same tunes on a keyboard...but easy wasn't different.

So you, in your business, what's your Baby Grand?  How do you signal to potential employers and colleagues that you are such a talent that you deserve a Baby Grand on stage?  We are all unique, but let us be distinctive!

2. Risk a reaction
Tim takes an audience right to the edge - and beyond for some - in order to get the 'payoff'. He tackles latent racism, religion, baby shaking, hypocrisy - stuff that is confronting and uncomfortable. He forces his audience to see and hear, but also to think, to feel, to reevaluate.  In business we often play for no reaction - we seek to dull people into submission, to have decisions ticked off as a "no brainer".  As a result maybe things don't change with the urgency and passion they should?  What if we actually tackled business from the perspective of seeking a goose bumps, heart pumping reaction?  Positive provocation is surely a key reason for us being employed...isn't it?

3. This is about me, not you!
Tim exclaims to his audience that the show is about him not them. In so doing, he of course takes the whole audience with him as he shares the gift of his comedic genius. In business, we spend a lot of time saying we are acting 'for the business'.  But why not be like Tim? Why not proclaim that this is about me, and then take the audience/your business on the exhilarating ride of what you - and only you - have to offer?

4. Be illuminating
Tim's performance is intelligent and insightful.  Using juxtaposition beautifully, Tim points to hypocrisy, to contradiction and forces us to question ourselves.  In business, we can often get weighed down by data and convention when we should really be expending energy and brain power on seeing patterns, connections or differences that no one has seen before.  Feel like giving it a try? Why not watch the Academy Award winning movie 'The King's Speech' (or any other movie) with your business problem in mind.  Use the plot and characters in that movie to unpick your issue - you'll be surprised how changing your perspective will illuminate the issue like never before.
5. Be fallible
The night I saw Tim perform he fluffed a couple of lines.  Whilst he will probably sweat on this, as an audience member it made me appreciate his talent even more.  Why? He was human.  It's the difference between a live performance and a recording - the risk of it going wrong, and the courage in light of this.  In business we are often so concerned about making a mistake that we stick to the script, and as a result we sacrifice our human-ness.

Photo uploaded on http://www.angry-feet.com/photos.php?mode=view&id=439 by Marniott on 23rd December 2010. Taken at Tim Minchin and his Orchestra, MEN Arena, Manchester
Posted by Bri Williams at 7:06 AM