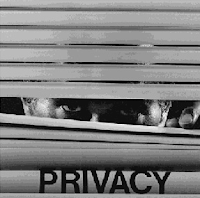 How uncomfortable would you feel if I told you I know how many children you have, where you live, and even what your car registration is?  Would you be more or less concerned if I told you I got this information without the use of technology? 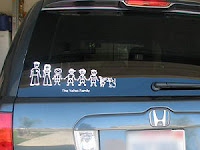 Say hello to "stick family" car stickers, with which people proudly drive to and from their home and work without a second thought about their privacy.  This serves as a powerful illustration of how we contextualise our decision making, and why 'privacy' may in fact not be as big a deal for consumers as some surveys would have us believe.

Privacy attitude surveys don't reflect behaviour
With lazy regularity, news services carry stories about the privacy fears consumers hold.  Surveys like the one reported in Mashable delight in telling us how concerned we all are;

"According to a new survey from Consumer Reports, 71% of respondents reported they are “very concerned” about companies that sell their information unbeknownst to users."

And how we try to thwart attempts to gain information about us.

And my response?  Of course.  Asking a consumer whether they are concerned about their personal information is like asking whether they like to breathe.  (Not great for the 29%).  Asking them the extent to which these concerns impact their decisions would be better.  Better still, observing what the consumer had disclosed willingly but perhaps unwittingly as they travel through life on and offline would be the only way of really gauging their attitude towards privacy.

Intended behaviour is a poor predictor of actual behaviour.  Is privacy important to you?  Yes.  Do you have a stick family sticker on your car? Yes.  Does this pose a risk to your privacy? Well, I never really thought about it like that.

Privacy is contextual
As a business, you have responsibilities morally and legally to protect consumer privacy.  That's not what this is about. The lesson from the stickers is that people contextualise the importance of privacy, and its relative importance is malleable.  If you get consumers claiming that privacy is their biggest concern in dealing with you despite your policies being compliant and accessible, and having appropriately communicated your privacy assurances, then I'd suggest the problem isn't your privacy management, it's your product.  If your offer is sufficiently compelling, privacy concerns melt away as people grab for their credit card. To see what I mean, just ask for a show of hands of those who have actually read the Apple terms and conditions.

For instance, Behavioural Economics tells us that we are enormously influenced by social norms (my neighbours have a stick family sticker), hate cognitive dissonance and will explain our behaviour in a rationalised way (of course the sticker isn't a privacy issue because I park in the garage), and view ourselves as being internally consistent even though we change our positions, decisions and behaviours throughout the day (I gave false personal information to that website so they wouldn't know about my family/I drove my car with the sticker to the shops today).

So to gain most insight into the behavioural tendencies of your market, don't rely on simply asking them because you will likely get an unconsciously misleading answer.  Instead, get ahead by knowing what they are likely to do by tapping into the playbook of Behavioural Economics.

Interested in finding out more?  Email me at bri@peoplepatterns.com.au.

PS If you like my blog, join other kind people who have supported my fundraising trek of the Larapinta trail.  It feels good to give, so jump in at https://www.gofundraise.com.au/page/BriforICV Thank you!

Car image from http://www.customlabels4u.com/decals-stickfamily.shtml
Posted by Bri Williams at 6:25 AM