In the two earlier articles Yo-Yo 1: Crazes happen because people herd and Yo-Yo 2:  Crazes come in two forms: Tsunami style and Mexican wave we covered how herding behaviour underpins Crazes like Yo-Yos, polished floorboards and iPhones, and that Crazes can be classified as either Giant Waves or Mexican Waves depending on their momentum and direction. If we agree that getting a mass of people to do something is good for business, let's now consider the role of marketers in starting a craze and/or surfing one.

Recall that Coke deliberately sent track-suited tricksters to my school to incite the Yo-Yo craze, an example of a Giant Wave, all consuming craze.  Clearly this was a marketing strategy to influence young minds to the positive qualities of Coca-Cola. But what did they do to ensure it worked?

What about a Mexican wave? Whilst the elements to start the craze might be the same as a Giant Wave it's the momentum that's the difference. Take iPods.  Someone to influence the market? Steve Jobs. Something tangible, accessible and talkable? The iPod's portability and distinctive whiteness made it a highly visible talking point.  Related messages? The launch by Steve Jobs on stage in his black top and jeans is key to influencing early adopters to purchase and carry his message to market. Aided of course by the famous and distinctive iPod posters which highlighted the product's whiteness.  But the momentum...

In a Mexican Wave the product craze is pushed forward - ideally with the market's own momentum but often with marketing's support. iPods were picked up by early adopters before trickling (at great speed relative to other products) to other influencible market segments. The energy comes from referral - implicit or explicit- and mass comes over time.

Contrast this with a Giant Wave - the early adopters are the market - it's all or nothing because the time period is condensed.  Mass comes immediately or not at all. For this type of craze, the marketing is more intense because all bases must be covered together for a finite period.

In the case of a Giant Wave, it is harder for competitors to get a slice of the action because by the time they have geared up, the craze might be over.  Mexican Waves on the other hand are susceptible to competitor activity as they try to steal the momentum that has been generated.

So for those in marketing, the key elements of Crazes seem to be mass behavioural change and momentum, summarised in the table below.   Central to the work we do is who we influence and how - but that will have to wait for another post - for now I have to go and find my Yo-Yo. 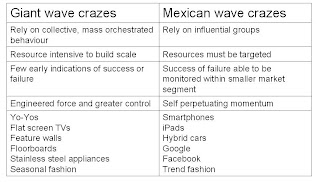