What do Eddie McGuire and Behavioural Economics have in common? If you tune into Channel 9 on Monday nights you'll see Million Dollar Drop which flips the traditional game show on its head.  Instead of contestants working their way towards prize money, they have to answer questions to retain the pot.


Host McGuire was quoted in the Daily Telegraph as saying "This one is the easiest show of the lot"...and on paper, it seems that way.  Eight questions and the money is yours! 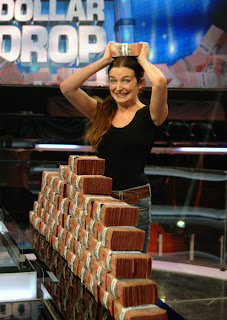 But this is where Behavioural Economics comes in.  The concept of loss aversion.  Pretty simply, we are hard wired to avert loss because it is psychologically painful.  Therefore to risk a loss of say, $50, I'd need the motivation of a potential gain of say $150. For contestants on Million Dollar Drop, they are going to be confronted with a significant amount of psychological stress resulting from the perceived "loss" of money for an incorrect answer as it physically drains away from the stack in front of them.  The pain of this loss will be much greater than they ever would have faced in a game like Who Wants to be a Millionaire, where they gained money along the way.
'Crazy people', I hear you say. Why on earth would they feel pressure when they don't even 'own' the money in the first place? 'Let me go on and I'll show them how it's done!' That's the armchair hero talking and using a rational argument ie we act perfectly rationally at all times and make decisions on the basis of logic and data. In other words, that being asked a question for $1 million is the same as a question for $1. But as Dan Ariely points out in both Predictably Irrational and Upside of Irrationality, we are not always rational and we are very prone to real and perceived emotional, intellectual and psychological forces.  That's why we drive across the suburb to queue for 4 cents off a litre of petrol.  That's why we can justify a new $200 handbag but baulk at buying our favourite loaf of bread if its not on sale.  That's why we tune in to see people on game shows for the emotional and often painful rollercoaster ride.
So what can we take from Channel 9's new symposium on Behavioural Economics?
So will you be tuning into Million Dollar Drop to see people chance becoming instant millionaires? If so, pace yourself because Eddie McGuire has hosted 728 episodes of shows with million dollar prize money and signed the winners' cheque only twice.  And now with the added intensity of loss aversion, I think the bank managers at Channel 9 can rest easy.
Posted by Bri Williams at 9:39 PM