Getting your bills paid: The persuasive power of a smiley face 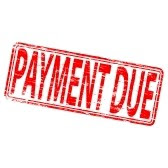 Bills. We all get them and all businesses send them so let's look at what you can do to encourage on-time payment using the lessons of Behavioural Economics.  After all, I'm sure you've got better things to do than chase late paying customers?

1. Use social norming to persuade
In the US a utility provider trialled a number of different strategies on utility bills to encourage a reduction in energy consumption.  First they included a comparison of your usage to that of your neighbourhood. People who had above-average consumption felt shamed enough to reign in their consumption - good news!  But those who had had below average consumption suddenly realised they could relax a bit, which saw their energy consumption rise toward the average.  Bad news.

What was happening here?  People are powerfully persuaded by what others are doing, both right and wrong.  Whilst this trial was effective in curbing the energy-hog behaviours, it didn't work with the lighter-users.

So the utility provider went back to the drawing board. Realising the influential power of what other's are doing, they tried another tactic. To the usage comparisons they added one small feature on the bills of the below-average energy users: a smiley face.  Those who were using less energy than their neighbours were now being acknowledged for their positive efforts, and through this, persuaded to continue.  Don't under-estimate the power of :)

When it comes to on-time bill payment, you can use the same logic.  Imagine a bar graph in the corner of your bill which compared average days to finalise the account along the lines of the following;

For notorious late payer XYZ Co this could help influence their behaviour towards the average.

On the other hand, so that early payer ABC Co doesn't get sloppy, you would include a reinforcing smiley face on their account.

2. Use on-time payment discount rather than late payment penalty 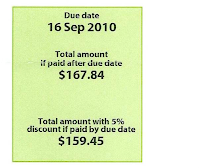 The telecommunications provider I am with threatens a $15 penalty for late payment.  My utilities provider on the other hand, offers me a 5% discount for paying on time.  Which do you think is more positively regarded by me as a customer?  The on-time discount offer is a much more constructive method of persuading people to pay their bills by the due date, and this is thanks to the impact of loss aversion.  In this case, it is painful to forgo the discount offered so I make sure I pay on-time. If I don't, I am to blame. In the late-fee example, I still may pay on time but that is because I hate the policy.  If I get charged the fee, the company is to blame.
Make your bills work harder so you don't have to
Chasing over due bills is a time sucking, painful task for businesses.  Using your billing paperwork to influence the bill payer will hopefully alleviate some of your pain. Happy billing.
PS If you like my blog, I'd love you to consider supporting my fundraising trek of the Larapinta trail. Every bit helps so to find out more, visithttps://www.gofundraise.com.au/page/BriforICV Thank you!
Posted by Bri Williams at 4:46 AM